Blog
You are here: Home / Blog / Uncategorized / Carsaig arches on Mull and Iona 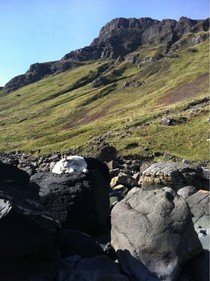 The adventure show on Tuesday 18th oct on BBC Scotland at 19.00. This one features the Craggy island triathlon that was in aid of Oban Mountain rescue.

We had a few days on Mull last week staying at Torr Na Locha, and walked along the coast to Carsaig arches. The guidebook time is 6 hours, and it certainly took us that time. The terrain varied between crossing streams, boggy, awkward rocky, boulders on beach and eventually grassy.

We saw lots of wild goats, this one stayed asleep while I photographed it.

The arches were spectacular. Damon climbed down so he could go through, and popped out at the more impressive arch beyond. From where I stayed you could just see this first arch.

On the way back we found nun’s cave. The roof drips down on you as you enter, but it’s very impressive inside.

We went over to the Isle of Iona the next day, where we went to Martyr’s Bay, and up to the highest point, Dun I, only a 15 minute detour from the road. We could see right the way to the Isle of Rum and Skye, even though it was quite a rough day. Then to the St Columba hotel for tea and scones.
The Abbey has finally had it’s scaffolding taken down.

Posted using BlogPress from my iPhone