Blog
You are here: Home / Blog / Beaches / An Exhaustive List of the Best Beaches on the West Coast of Scotland

Scotland has a wealth of features to offer visitors: rugged landscape, lochs, history, culture, and whisky of course! Yet the true jewels of this ancient land are its beaches. You don’t need to travel to the Caribbean to enjoy pure air, crystal clear waters and long stretches of powder-white beaches. Some of the most unspoilt and beautiful beaches in the world can be found on the west coast of Scotland.
There’s nothing like a brisk walk along the stunning coastline, breathing in the salty air of the North Atlantic to clear the cobwebs and lift your spirits. You can finish off your day, warming up by a crackling log fire, sipping on a wee dram in one of the many welcoming and cosy inns along the Whisky Coast.
If you want to explore some of the most beautiful beaches that the west coast of Scotland has to offer, then you’re in for a treat. Just don’t forget your camera!
Here’s an exhaustive list of some of the most spectacular beaches, right here on the west coast of Scotland.

Voted the finest beach in the UK and considered one of the top 10 most beautiful beaches in the world, Luskentyre, locally known by its Celtic name, Losgaintir, can be found on the west coast of the Isle of Harris in the Outer Hebrides.

Here you’ll find stunning turquoise waters gently lapping against miles and miles of meandering powder-white sand. Apart from the temperature, you could be forgiven for thinking you’re on the Whitsunday Islands in Australia.
This unspoilt, tranquil paradise is the perfect place to enjoy a picnic while the kids play and explore. You won’t find cafes, bars or playgrounds here, just nature at its very best, untouched by man.
The calm waters are perfect for canoeists. Trekking and hill walking are also popular pursuits. The breathtaking beauty of Luskentyre, enhanced by the dramatic skies, is a photographer’s dream.

Although slightly more difficult to access, the breathtaking views across Traigh Seilebost to Luskentyre and Taransay are definitely worth the effort. This beautiful sandy beach is overlooked by sand dunes and machair (low-lying, fertile grassland, particular to the north-west coast of Scotland). It’s a popular destination for walkers and photographers alike.

The tiny, uninhabited island of Taransay, just to the west of the Isle of Harris, was host to the popular TV series Castaway 2000.
Taransay is accessible by boat, and day trips are easy to book. The island is home to a number of stunning golden beaches and wildlife. Basking whales can often be spotted from the Sound of Taransay, the stretch of water that separates the island from the west coast of Harris. Red deer, Golden and Sea eagles and sheep owned by local crofters also inhabit the island.
There’s no transport on Taransay, but the walks are excellent so all you need are your feet.
Taransay is popular for surfing, canoeing, fishing and boating. Equipment can be hired at the water sports centre located at the Sound.

On the west coast of the neighbouring Isle of Bute, you’ll find the red-sanded beauty of Scalpsie Bay. Previously used for military purposes during WWII, today the beach is a stunning and tranquil spot to visit. The bay features the beautiful backdrop of the Isle of Arran and Seal View viewpoint where a colony of 200 seals can be observed.

The neighbouring beach of Ettrick Bay has a tearoom with a wonderful selection of homemade cakes and a children’s play area. The bird hide at the south end makes it an ideal spot for birdwatching.

Backed by imposing sand dunes, machair and a tranquil loch full of freshwater brown trout, Sandwood Bay is one most wild, remote and spectacular beaches in Scotland and quite possibly one of the most unspoilt, untouched beaches in the world.
Some of the rocks around the bay are among the oldest in the world and are thought to be the original formations that once connected Scotland with North America.
The 1.5-mile long beach directly faces the North Atlantic. It can only be reached by a 4-mile well-trodden path leading from the tiny hamlet of Blairmore. The path is regularly maintained by the John Muir Trust, owners of the Sandwood Estate. 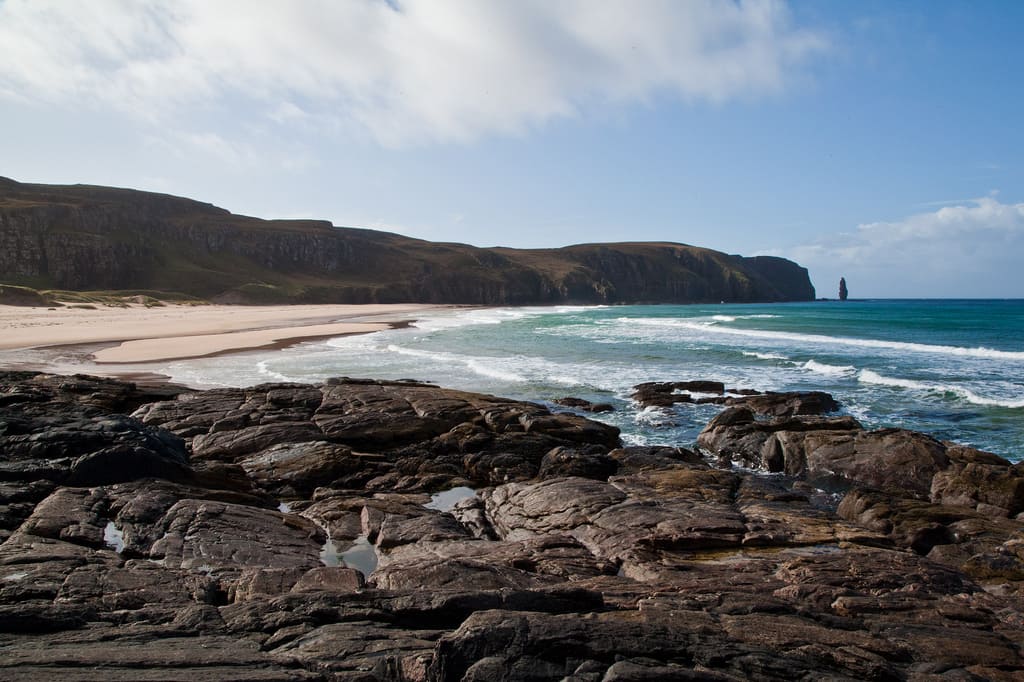 The walk from the car park to Talisker Bay is flat and easy and should only take about 20–30 minutes. Visit at low tide to see the beach at its best; the wonderful mixture of black and white sand creates beautiful patterns.
Talisker Bay is surrounded by high cliff tops and a magnificent waterfall on the right.
Considered one of the most romantic spots in Scotland, Talisker is well known for its stunning sunsets, making this beautiful bay popular with families, photographers and romantics alike. After a day out at the beach, warm up with a single malt from the Talisker Distillery at nearby Loch Harport.

St Ninian’s Beach is in fact a 500-metre long spit of fine white sand, officially known as a tombolo. It’s the largest of its kind in the UK and is thought to be one of the finest examples in the world. The award-winning tombolo that connects St Ninian’s Isle with Shetland, is often used in promotional material and advertising for the Scottish tourism industry.
The area is popular with water sports enthusiasts. Activities include kayaking, diving, snorkelling, fishing, sailing and wind surfing.
It’s a great place to bring the family. There are wonderful picnic spots including a sheltered cave; you never know, you may find buried treasure! The tombolo leads to the site of a 12th century chapel where a schoolboy in 1958 discovered a treasure of hoarded silver. The hoard, now stored in the National Museum of Scotland in Edinburgh, is thought to have been hidden by monks to protect it from Viking raiders.

One of Shetland’s finest beaches can be found on Yell, the largest of Shetland’s northern isles. Breckon Sands is a beautiful, sandy beach that’s surprisingly sheltered considering it faces the North Atlantic.
The dunes are ideal for setting up a picnic when the weather is fine. The area offers visitors fantastic walks, spectacular views and younger kids will love shell picking on the beach.
There are regular ferries from the mainland and the journey only takes about 20 minutes.
The island itself is practically uninhabited and much of it is a protected nature reserve. It’s a haven for nature photographers, bird watchers and walkers. On land you can spot skuas, red-throated divers and otters that inhabit the island. Out to sea you might be able to spot porpoises, dolphins and, if you’re really lucky, killer whales.
This ancient island is thought to have been used as a settlement as far back as 4,000 years ago. Archaeological finds have included Viking and Iron Age pottery, combs made from bones and Roman coins.

Featured in the film Local Hero, this stunning beach has fine white sands lapped by crystal clear waters. It lies just south of the Morar Estuary and has spectacular views across to the Isle of Skye. The stunning sunsets provide a romantic setting; in fact, you can actually get married on the beach. Camusdarach offers a great day out for all the family. The water is not too cold and kids will love exploring the rock pools, where limpets, whelks and shore crabs can be found, or collecting shells further along the bay. 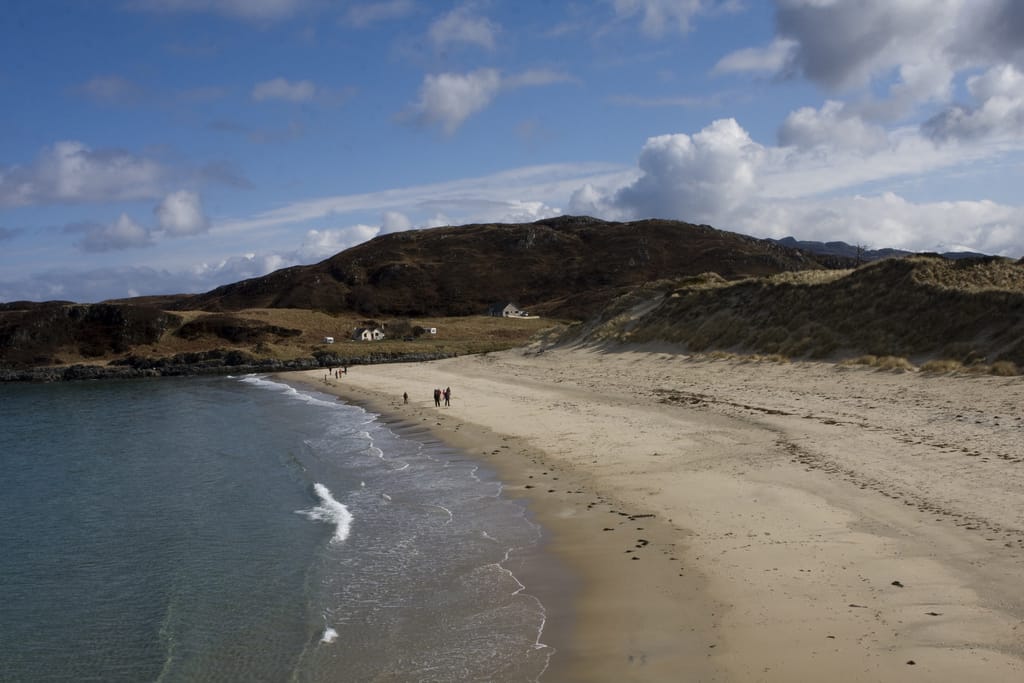 Sanna Bay is located at the most westerly point of mainland Britain. A long, winding single-track road will eventually lead you to a magnificent, white, sandy beach and turquoise waters comparable with those in Sardinia or the Caribbean.
Here you can take in amazing views to the Small Isles and Portuairk village. But the main feature of this beautiful beach is the wildlife and fauna. In the springtime, the dunes are rich with colour. Sanna Bay is the perfect place to spot dolphins, whales, sea eagles and otters. It’s a nature lover’s paradise where you can leave your worries, cares and the world behind.

The crystal clear waters and white sandy beach are comparable to the tropics, yet the setting for Calgary Bay is quintessentially Scottish. Surrounded by vast, steep hills, the landscape is peppered with abandoned crofter’s cottages and stone forts. The dunes and machair are inhabited by grazing sheep and there’s even a castle: 19th century Calgary Castle, a gothic mansion immersed in woodland, overlooks the bay.
Calgary Bay is easily accessible and has a small car park nearby. Check out the adorable tearoom and art gallery – its roof is made from an upturned boat and a dry-stone wall protects the dwelling from the elements. Here you’ll find local art displayed and for sale, hot soup, drinks and cakes made from fresh, local products. 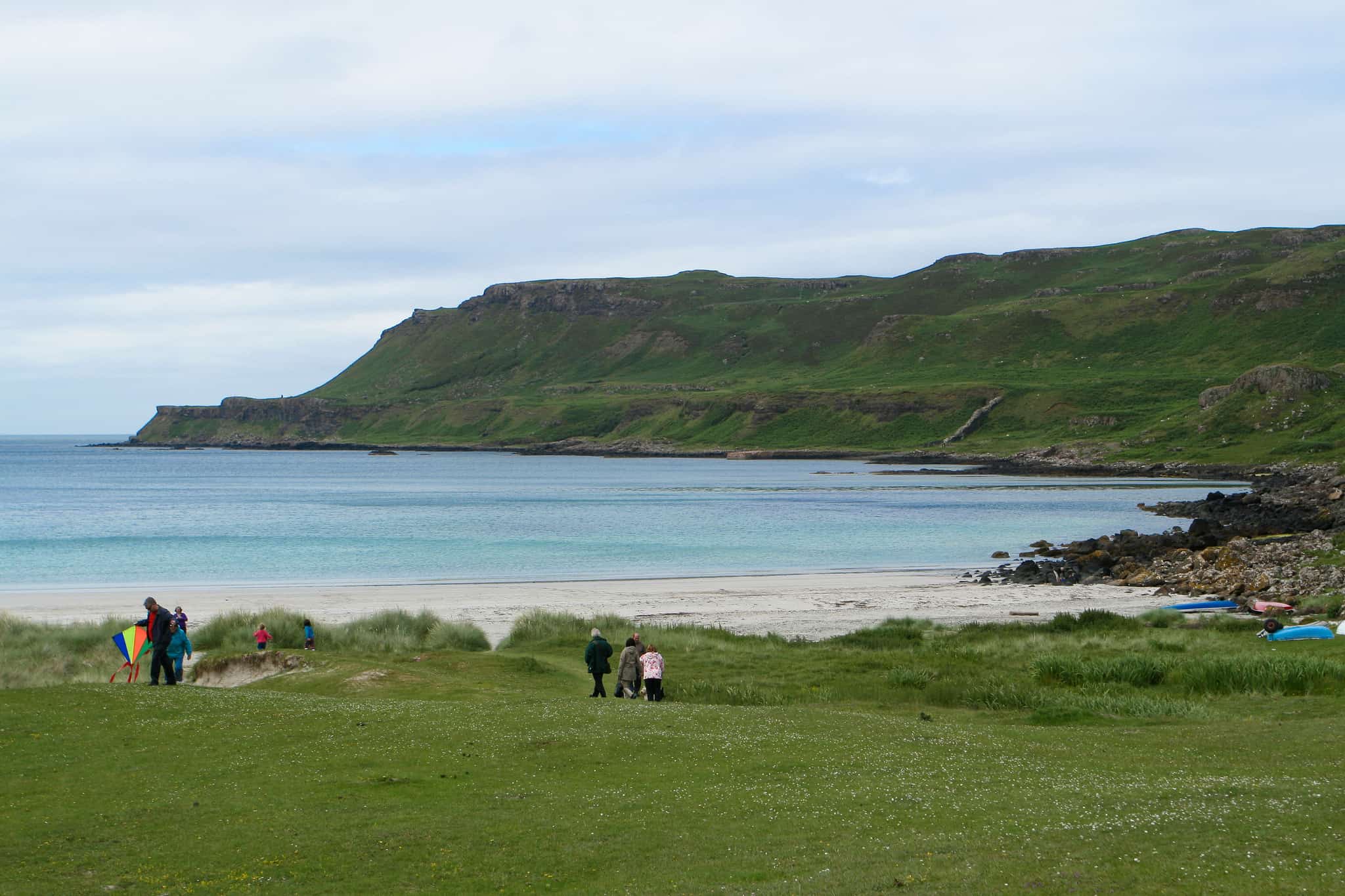 The golden sandy beach of Kiloran Bay sits on the north west coast of Colonsay, Argyll and The Isles. The strong westerly winds and North Atlantic swell make it a popular destination for surfers. However, many visitors come here to walk or explore. At the north end of the beach you can look around 3 vast caves that date back to pre-historic times.
The dramatic skies and contrasting moods of the sea here, make Kiloran the perfect canvas for artists and photographers. The atmosphere can change from calm and tranquil to wild and untamed in the course of a day.

Just three miles north of Lochinver, you’ll find a perfect little paradise. Achmelvich is one of a scattering of secluded beaches in this area with azure blue seas, white sands, incredible rock formations and an impressive cliff top backdrop. The walk from the car park will take you across the cliff tops that have stunning views out to sea. You may even get the chance to spot a dolphin or two. Achmelvich has some excellent walks, one of which will take you from the beach up to an abandoned hermit’s castle and back.
Achmelvich is a great snorkelling spot. It’s very popular with water skiers, windsurfers and kayakers. Fishing is also popular here. Common catches are cod, haddock, whiting and mackerel. However, if you don’t fancy fishing for your supper, there’s a very good fish and chip shop right next to the beach.
Be aware that dogs are not permitted on the beach during the peak tourist season. 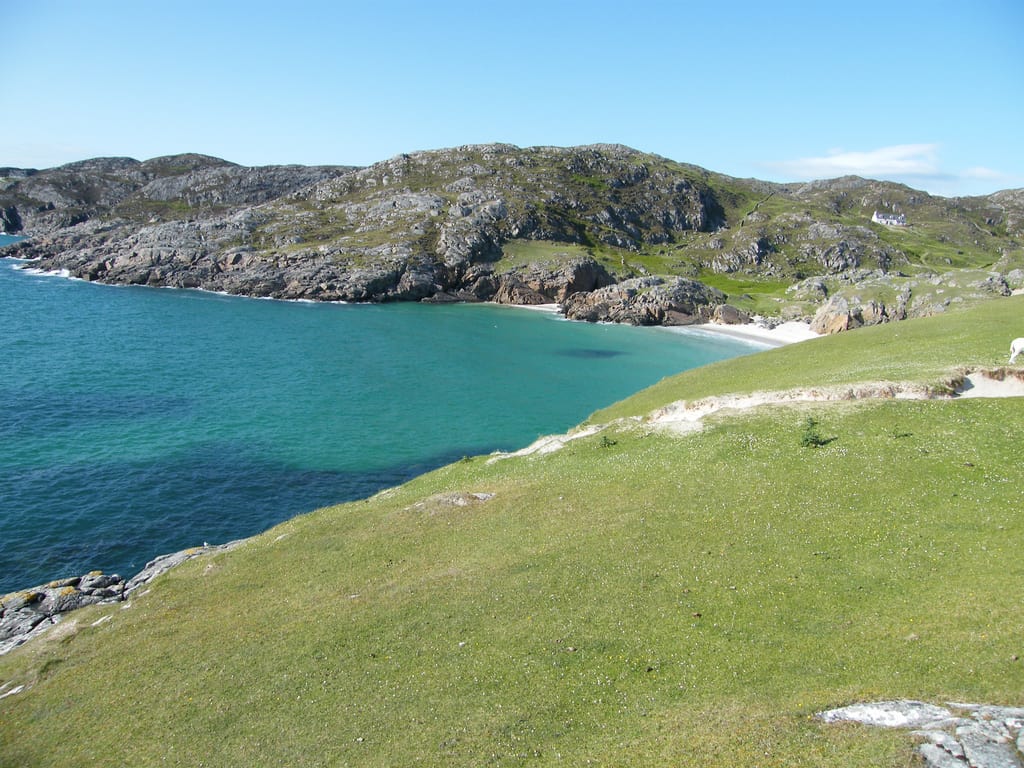 Beaches near to Oban

A short walk down from a sign-posted footpath at Benderloch, you’ll find the pretty and tranquil setting of Tralee Beach. Part shingle, part sandy dunes, this secluded haven is a wonderfully safe place for children to play and is also popular with dog walkers.

Ganavan Sands lies at the end of the Oban esplanade, just past the ruins of Dunollie Castle, a former seat of the clan MacDougall dating back to the 12th century. After a gentle walk down to the beach, you’ll be greeted by spectacular views across to Morvern, Mull and Lismore. The shallow waters make it a safe swimming spot and there are rock pools and coves to explore. It’s a great beach for building sandcastles and offers a wonderful day out for the kids. It’s the perfect spot for a picnic, however there’s also a delightful little kiosk selling drinks and snacks.

If you want to take to the water you can launch a boat from Taynuilt, a secluded, pretty little beach only 600 metres away from Bonawe House.

After a long day at the beach, what could be better than dining on freshly caught oysters and seafood in Oban or savouring a full-bodied, warming single malt from one of the distilleries in the local area.
If you want to savour the delights of Scotland’s west coast beaches, contact Bonawe House to find your ideal holiday accommodation in Oban. 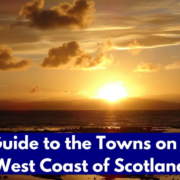 A Guide to the Towns on the West Coast of Scotland 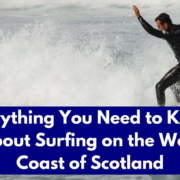 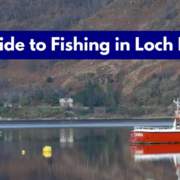 A Guide to Fishing in Loch Etive 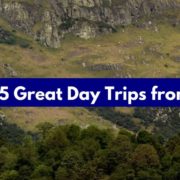