Blog
You are here: Home / Blog / oban / McCaig’s Tower: Everything You Need to Know

Why, you might ask, does the fishing port of Oban boast a structure that resembles the Colosseum of Rome, standing conspicuously on a hill looking over the town?

The structure, a prominent landmark for visitors arriving by train or ferry, is called McCaig’s Tower, and it dominates the locality. Perched on the summit of Battery Hill, it looks out over Oban and the surrounding area, where its presence never fails to impress visitors to the town. Probably the best known building in Oban, it’s quite rightly one of the most popular attractions in the area today and should certainly be on your list of things to do. 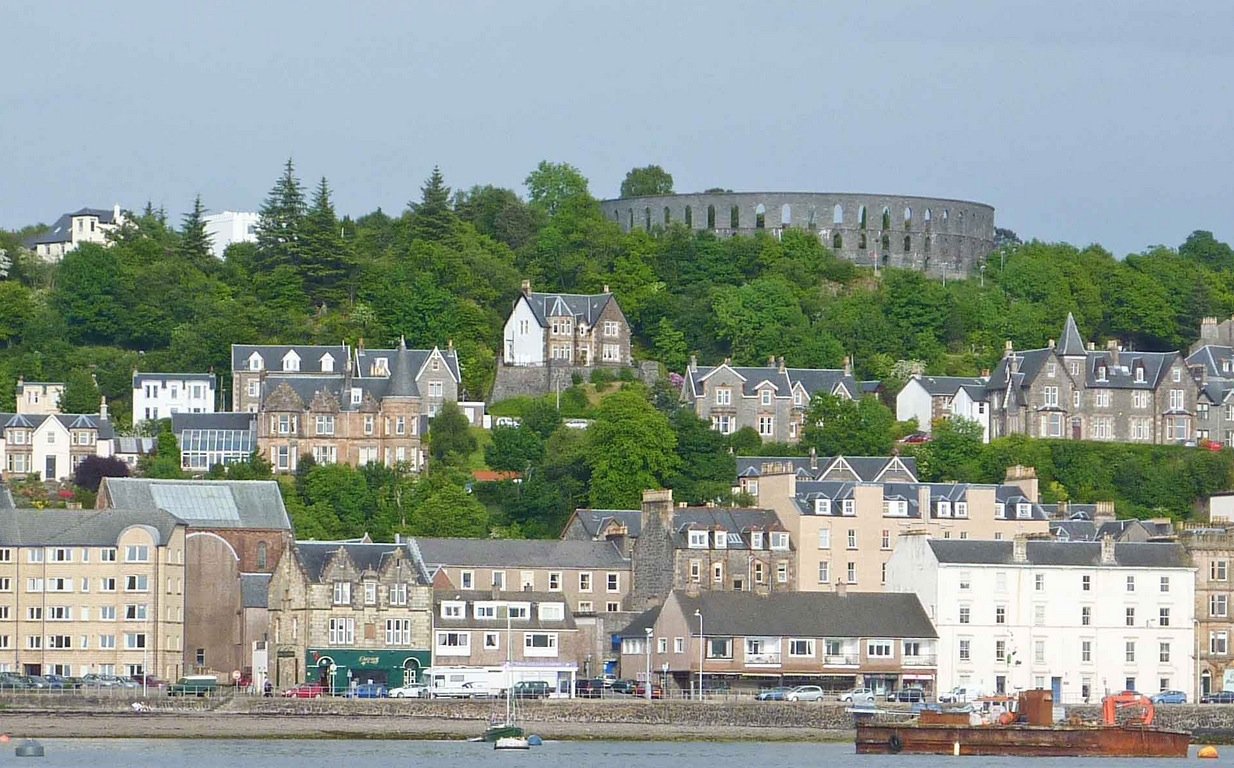 The structure is constructed from Bonawe granite quarried at Loch Etive. The building has a circumference of 200m with two tiers of lancet arches, 44 on the lower level, which also accommodates an entrance to the structure, and 50 above. The height varies around the circumference as it takes account of the contours of the hill on which it stands.

Until a few years ago the stone walls encircled a patch of weeds and scrub beloved of local children and fly-tippers, but few others. However, more recently, the council has cleared it out, and developed pleasant gardens more befitting of such an attraction.

The History of McCaig’s Tower

The tower was the brainchild of local banker and philanthropist, John Stuart McCaig, after whom it’s named. He commissioned the structure in 1897 at a cost of £5,000. It was designed to provide work for local stonemasons during the winter months, but also as a monument to the McCaig family. However work stopped with the death of the benefactor in 1902. 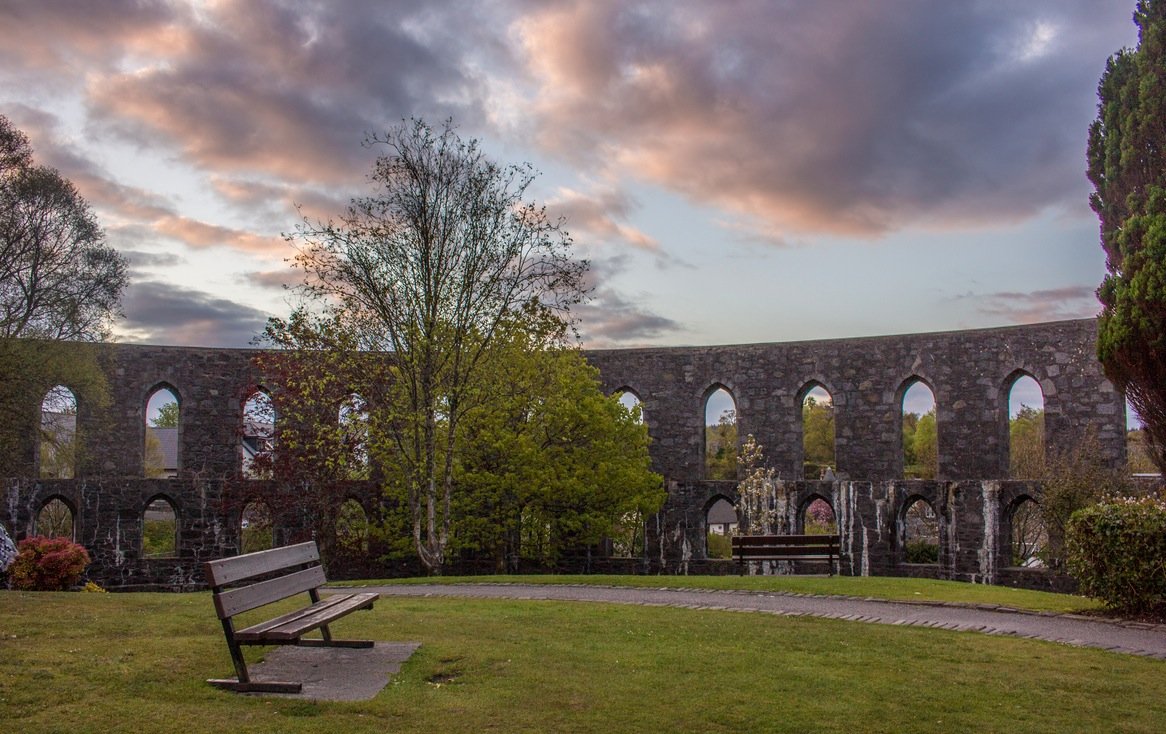 Originally the building was believed to be intended for a greater purpose, variously thought to be an art gallery, or museum. The intention may have been to construct further buildings or a tower within, however the walls are very thin and little effort was made to prepare the land for anything more than what currently exists. Instead Oban is left with a spectacular visitor attraction in which to pass the time whilst enjoying the views across the town and bay.

How to Get There

Most people get to McCaig’s Tower from the town centre on foot. Just head up Argyll Street, then climb the 144 steps of Jacob’s Ladder. It’s quite a climb, but well worth the effort as the gardens command spectacular views over Oban Bay and out towards the islands. If you’re quite fit, it’s a short ten-minute walk although steep in places.

If that sounds too difficult, you can drive to the base of the tower by following the Fort William road, then take Deanery Brae and follow the signs to McCaig’s Tower. There’s a small car park from where the gardens are accessed by a short flight of steps.

The attraction is open all year round. 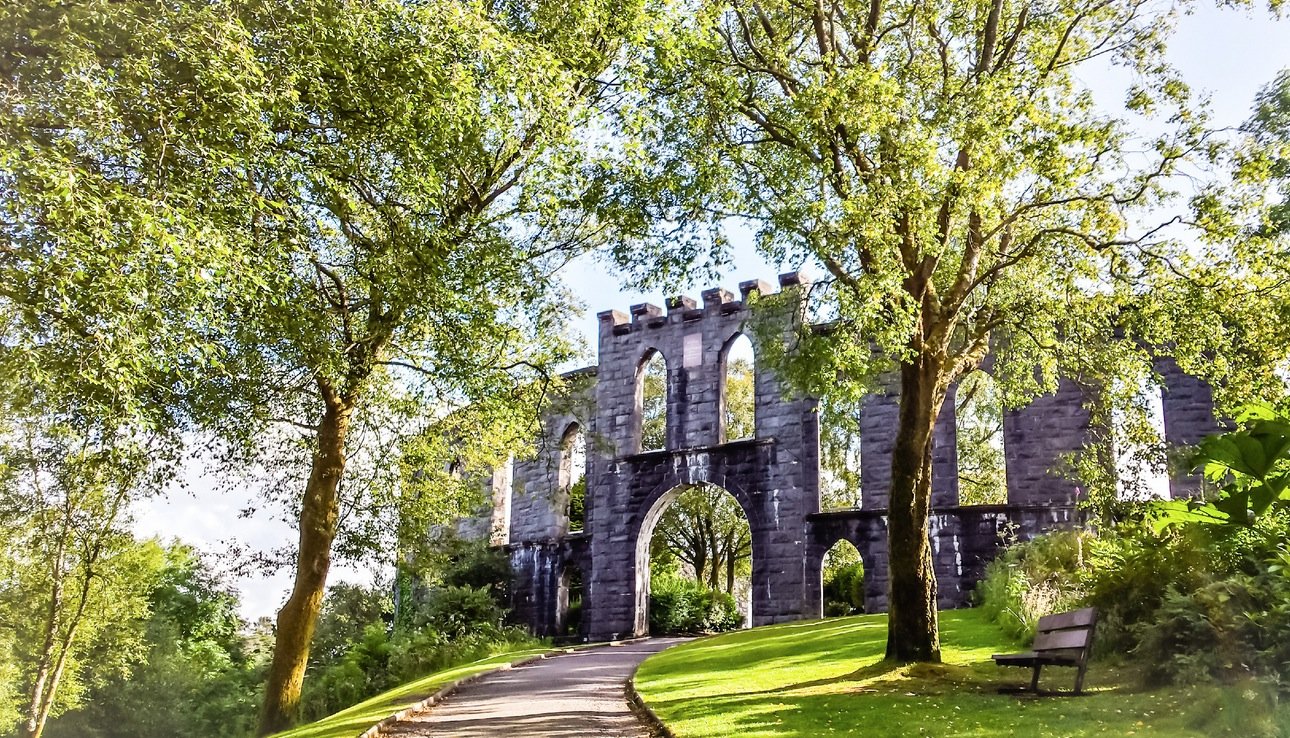 Oban itself can be reached by sea, as it’s the main ferry port for Mull, Colonsay, Tiree and Lismore as well as the Western Isles. It can also be accessed by rail from Glasgow and beyond.