Things To Do In Oban

The largest town in Argyll & The Isles, Oban is a delightful port with panoramic views over the surrounding mountains, lochs and islands. Known as the ‘Gateway to the Isles’, Oban is a hub for tourists departing to the islands of the Inner and Outer Hebrides.

But Oban isn’t merely a place to stopover as you head to the islands; it’s well worth a visit in its own right. There’s plenty of explore, a wealth of local shops, excellent accommodation options, and some splendid sunsets to enjoy. And of course, you wouldn’t want to miss out on enjoying another of its assets, as alluded to in its other moniker: the ‘Seafood Capital of Scotland’. Yes, with some award-winning restaurants and some of the freshest seafood you’ll ever taste, Oban is a delight for foodies. 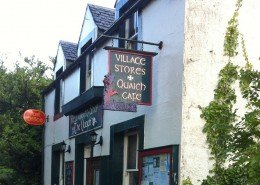 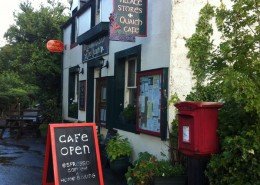 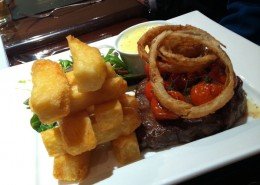 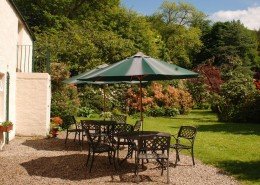 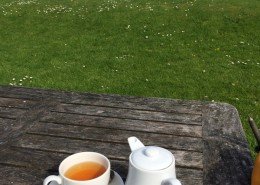 Oban has plenty of attractions to keep visitors, young and old, entertained throughout their stay. Here’s a selection of things to see around the town.

McCaig’s Tower is a prominent landmark on the hill overlooking Oban. A steep 20–30 minute climb brings you to this Colosseum-like folly, built by local wealthy banker John Stuart McCaig between 1897 and 1902. The spectacular views over the Oban Bay make it well worth the climb.

Nestled beneath the steep cliffs in the heart of Oban is one of Scotland’s oldest sources of single malt: the Oban Distillery. Here you can take a tour of the distillery, which is topped off with a tasting of a 14-year-old single malt with crystallised ginger.

A pleasant twenty-minute stroll along Oban’s Esplanade towards Ganavan Bay brings you to Dunollie Castle. Built by the MacDougalls of Lorn in the 13th century, today you can visit the ruined keep – which is undergoing restoration work – and the nearby house which contains a small museum. There are also spectacular views to Lismore and Mull.

En route to Dunollie Castle, you pass the Oban War Memorial and Lighthouse, which is an excellent place to stop and sit on the picnic benches, taking in the views to the castle, the Isle of Kerrera, and the ferries coming in and out of port.

Military buffs will enjoy the excellent Oban War and Peace Museum, which has a fascinating collection of photographs and artifacts from Oban depicting the rich cultural history of the town and its inhabitants. It includes displays of Oban’s strategic role during the war, and much more besides.

A scenic 40-minute walk, or 10-minute journey by road, takes you to Ganavan Bay, a picturesque sandy beach with spectacular views to Mull, Lismore and Morven. The beach has public toilet facilities and is a good starting point for walks along the rugged coast or inland towards Dunbeg.

Being a port town, Oban has plenty to offer visitors who wish to explore by sea, with operators offering wildlife boat trips as well as scenic tours around the lochs and islands. The tours are a magnet for wildlife enthusiasts as the area around Oban’s coastline is a special conservation area where birds and marine life abounds. Operators include Coastal Connections, Clyde Cruises, and Allen’s Boat Trips, while Caledonian McBrayne offers a number of day trips to nearby islands.

If you fancy getting a little closer to nature, there are a number of sea kayak companies offering guided trips and sea kayak lessons, including Oban Sea Kayak Guides, Sea Kayak Oban, the National Kayak School and Seafreedomkayak.

With excellent road and rail connections plus its links to the islands, it’s little wonder that Oban is well stocked with amenities for visitors. There are major chains of shops, supermarkets, banks, garages, pubs and restaurants, as well as a post office. You can also find a number of independent shops selling souvenirs, gifts and local crafts to remind you of your stay.

George Street is the town’s main shopping area, and there are plenty of small lanes around the area worth exploring. 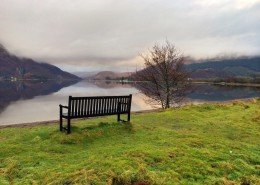 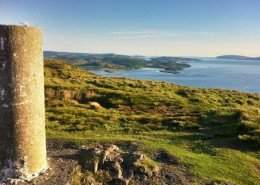 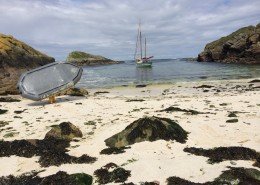 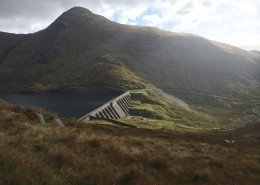 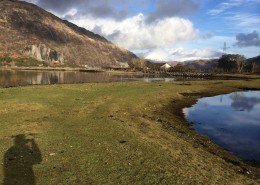 If you fancy heading out of Oban, there are plenty of options for exciting day trips in the surrounding area.

Five miles north of Oban, located on a huge rock overlooking the Firth of Lorn, is Dunstaffnage Castle, once the stronghold of the MacDougall clan and one of the oldest stone castles in Scotland. Built by Duncan MacDougall in c. 1220, this imposing ruin once housed the Stone of Destiny, now in Edinburgh Castle. In 1746, Bonne Prince Charlie’s heroine, Flora MacDonald, was held prisoner here for a short time.

Near the castle is the new Ocean Explorer Centre, part of the Scottish Association of Marine Science. Housing an underwater observatory, exhibitions, a little cinema showing short films about the work of marine scientists in the area, plus a gift shop and café, it’s a fascinating day for anybody with an interest in marine life.

The Scottish Sealife Sanctuary is 10 miles north of Oban and offers a wonderful family day out. With over 50 marine displays, visitors can see rescued otters and seals, get up close to majestic sharks, marvel at enchanting seahorses and watch graceful rays. Tickets are valid all day and include daily talks and feeding displays. There’s also a gift shop and café.

Situated on the north of Loch Eive, Ardchatten Priory and the surrounding gardens are in an idyllic location. The priory is now a private house, but visitors can access the ruined chapel, wander around the beautiful gardens, or enjoy some walks in the grounds with names that hark back to the site’s monastic origins like Monk’s Walk and Priory Walk.

Castle Stalker, built around 1320 when the MacDougalls were Lords of Lorn, is a picturesque castle surrounded by water approximately 25 miles north of Oban. Frequently used by King James IV of Scotland as a hunting lodge, the castle is privately owned but there are a number of tours run each year.

Magical Glencoe is probably the most famous glen in Scotland and one of the highlights of any trip to Scotland. The area is a mixture of mountain peaks, waterfalls and rivers, offering majestic views similar to the Alps.

A slice of paradise on Scotland’s west coast, the Arduaine Gardens are an idyllic place to spend a few hours. With a variety of local and exotic plants, visitors can wander through woodland paths, explore the water gardens, and visit the stunning cliff-top point with views over the Sound of Jura and its islands. There’s an abundance of birds and other wildlife, and it’s a great spot for a picnic.

The magnificent ruins of Carnasserie Castle are located on a hill overlooking the peaceful Kilmartin Glen. This 15th century tower house was built by John Carswell, rector of Kilmartin. A 5-storey tower house with impressive hall, it was blown up in 1685 by Royalist forces and fell into disuse.

Located between Oban and Lochgilphead, Kilmartin Glen is one of the most important archaeological sites in Europe. There are over 350 prehistoric and historic sites within a 6-mile radius of the village of Kilmartin, including standing stones, a henge monument, chambered cairns, and natural rocks decorated with cup and rings marks. There’s also an excellent museum.

Armaddy Castle Gardens are in a spectacular setting with views stretching over the islands. Protected from the Atlantic winds by the castle, which isn’t open to the public, this is a garden for all seasons, with carpets of daffodils and bluebells, a walled gardens filled with rhododendrons, plus a number of rare and unusual plants and shrubs.

The Scottish Beaver Trial at Knapdale is part of a unique conservation project to reintroduce wild beavers into Scotland. Four beaver families were introduced into Knapdale forest and monitored for 5 years to see how they coped. While the monitoring phase is now over, you can still visit the beavers.

The Auchindrain Trust is the most complete surviving example of a Highland township, which gives visitors an insight to how people lived, worked and played in the old Highlands. Visitors can wander through the settlement, exploring the restored buildings and the everyday objects its inhabitants used.

The tiny Isle of Lismore is 10 miles long and 1 mile wide, and can be reached by ferry from Oban and Port Appin. Visitors can explore ruined castles, brochs and duns, and it’s an excellent place for wildlife lovers with seals, peregrines and razorbills in the area.

The largest of the islands in the Argyll and the Isles group and the third largest island in Scotland, the Isle of Mull is an unspoilt paradise with over 300 miles of coastline. With one of the most varied landscapes in Scotland, the island has lush vegetation, pristine white sands, rose-pink granite, and emerald waters. There are two impressive castles to explore, a narrow-gauge railway, and it’s one of the best places to spot the rare white-tailed sea eagle. It’s also home to Tobermory, the colourful main town, made famous by the hit children’s TV show Balamory.

A short ferry crossing from the Scottish mainland, the Isle of Luing is a perfect day trip from Oban. A former slate island, little has changed here over the last 200 years. Famed for its whitewashed cottages and picturesque villages, it’s home to a diverse variety of wildlife including otters, buzzards and hen harriers, while visiting eagles can be spotted, and seals, porpoise and dolphins are in the surrounding sea.

The Isle of Seil is 12 miles south of Oban and separated from the mainland by a narrow sea channel. Visitors can drive over the 18th century humpback bridge, known locally as the Bridge Over the Atlantic. Main attractions here are the An Cala Gardens and Scottish Slate Island’s Heritage Centre.

Neighbouring Easdale Island is the smallest permanently inhabited island of the Hebrides, and from there you can take a boat trip to Corryvreckan, the world’s 3rd largest whirlpool, created by the strong Atlantic currents and strange underwater topography. 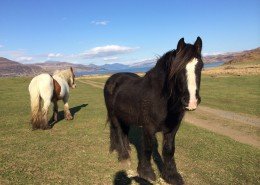 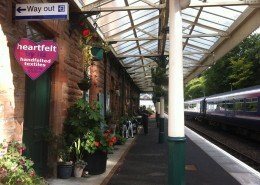 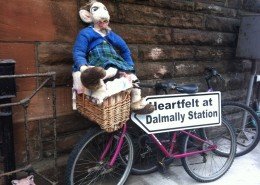 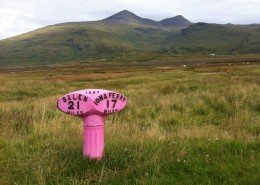 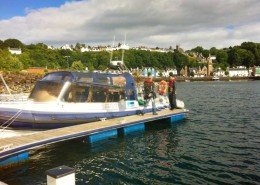 Regardless of how you’re travelling, the journey to Oban is a delight. Reachable in 2 or 3 hours from Glasgow and Edinburgh, the scenery you’ll encounter is a memorable part of your journey. So much so that if you’re driving, your journey may be frequently interrupted by an overwhelming urge to stop along the way to drink in the view.

If you’re travelling by coach, you have a couple of options:

Rail travellers en route to Oban get to experience the world famous West Highland line along the wild and wonderful west coast. For times, prices and to purchase tickets visit the ScotRail website or the Trainline website. It’s worth noting that advance purchase tickets often come at a discount.

If you’re flying to Scotland, most major airlines, including a number of low-cost carriers, fly to Glasgow or Edinburgh where you can pick up a hire car, or catch a train or coach to Oban.

Oban also has its own airport, which is only suitable for small aircraft. This can be reached by private charter flights, and is also the departure point for flights to Islay, Tiree, Coll and Colonsay with Hebridean Air Services.

Alternatively, Loch Lomond Seaplanes offer a service between Glasgow and Oban on a 9-seater seaplane.

Oban is a busy port with regular ferries to and from the islands of Mull, Colonsay, Coll, Tiree, Lismore, Barra and South Uist, from where you can use a network of ferries to reach other islands. The Caledonian McBrayne website is an excellent source of information and can also be used to purchase advance tickets.

Oban is also a frequent stop for various cruise liners.

If you fancy arriving on your own steam, Oban is part of Route 78 on the National Cycle Network, which stretches from Fort William to Cambeltown. For further information, see the Sustrans website.